Since the first working party in October 2006 the Priory Fields volunteers have made considerable improvements in a number of areas. In order to create the main entrance to the fields a section of chain link fencing was removed together with some large hawthorn bushes. 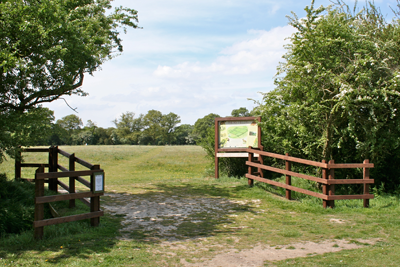 The ditch was then piped and the entrance ramp levelled. A balustrade was erected at the sides of the entrance and an information board installed.

Many months were spent clearing brambles and undergrowth along the length of the brook from the eastern boundary to the Old Bridge to make an attractive feature. A new bridge was built to create a convenient access point to the Priory Arch. This is of a robust construction in order to take light vehicles when required for maintenance of the arch. 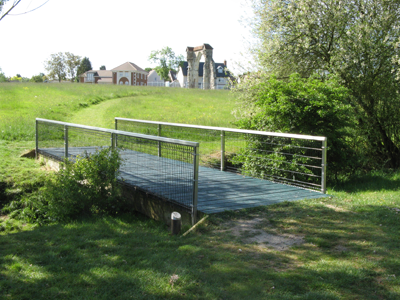 are regularly cut. The grass around the arch is also frequently mown to enhance the look of this ancient monument. As a result of the research carried out by the Maldon Archaeological and Historical Group small paving slabs have been inset into the grass at the corners of the original priory and joined by closely mown strips to show the wall lines.

The trees are generally left in a natural state where safe to do so as they provide a wide variety of wildlife habitats. However where low branches could prove to be a hazard or an obstruction they have been removed with all work being carried out in accordance with the Tree 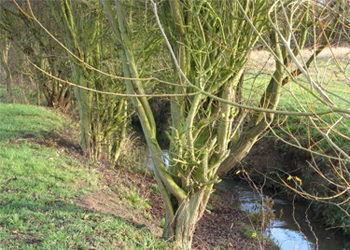 Preservation Order regulations. Large quantities of old barbed wire have also been removed from the site to improve safety around the fields.

Several large stones from a later building on the site, but not from the Priory itself, have been placed in pairs at strategic points around the fields. Fixed to each pair are a couple of oak planks to form seating benches. Since acquiring the Old Bridge, the area around it and the entrance to the West Water Meadow has been extensively cleared of undergrowth and wooden fencing erected to make it safe.

In order to improve accessibility of the paths in all weathers and for the benefit of those with invalid scooters or pushchairs a large quantity of crushed concrete has been spread in the hollows and wet areas of the paths. Many trees, of various types, have been planted and hedging has also 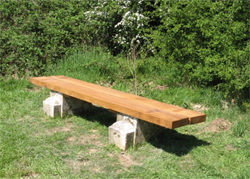 An entrance has been opened up in the north west corner of the West Meadow giving access from Moor Hall Lane for the convenience of residents living in and around that area. Here bins for litter and dog waste are also to be found.

The bank of the brook through the West Water Meadow has been cleared of scrub and leads to an area at the west end of the meadow that has been set aside for the purpose of a small Memorial Wood. This is probably the most peaceful and undisturbed part of Priory Fields where local 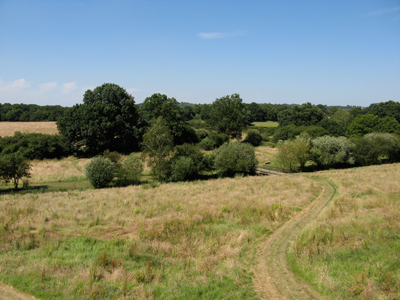 residents may request to have a tree planted in memory of a loved one.

As an indication of how the local youngsters can become involved in the fields the cubs and scouts have made a considerable number of various bird and bat nesting boxes that can be seen in the trees around the fields.

Over a couple of winters the hedge along the eastern boundary adjacent to the playing field has been cut back and the ditch cleared to improve drainage.

In order to make your visit more enjoyable there is a area with picnic tables just inside the main entrance and here you will also find the start of a 1.5km jogging course that is marked by posts around the route.

The work continues and hopefully the fields will gradually become an even more pleasant place to take a leisurely stroll or to explore in more detail.