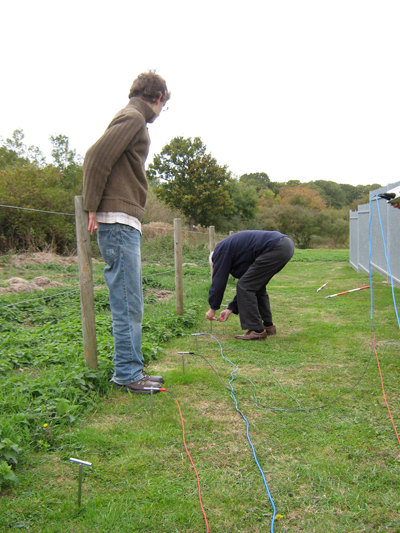 Before the safety fence was erected around the arch a local expert on the history of the area, Geoffrey Worricker, approached the Maldon Archaeological and Historical Group (MAHG) to carry out a geophysical survey in the priory field. This was carried out and it showed the fairly clear outline of the foundations of the Presbytery and part of the North Transept. 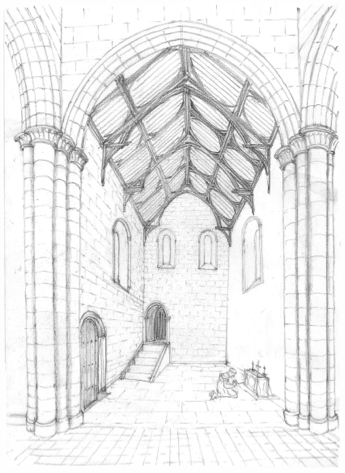 Artist’s impression of the
North Transept

The group then tried to add surrounding areas to the plan but despite their best efforts, and using different equipment, little more was picked up. They realised that the foundations to the Nave and the South Transept had been stripped out, as probably had those of other buildings. They now think also that the Dormitory and other non-church buildings to the North were very likely built in timber, this being far more economical, with Bicknacre not being a wealthy Priory.

With regards to the church outline they knew that the South Transept would be the exact opposite of the North Transept, but were interested to find how far the Nave extended. It runs into adjoining property so that instead of having regularly cut grass to work on, they had to contend with uneven ground, nettles, old rotted vegetation, a manhole and cesspit. The Friends’ volunteers took care of the clearance work but no conclusive results could be obtained.

It should be explained at this point that their equipment measures variations in the electrical resistance in the ground. Ground penetrating radar (GPR) on the other hand is far more advanced equipment and as a last attempt to provide the complete picture Dr. Tim Dennis surveyed the ground using GPR. This confirmed and refined their plan but even so was unable to find much more of the Nave. 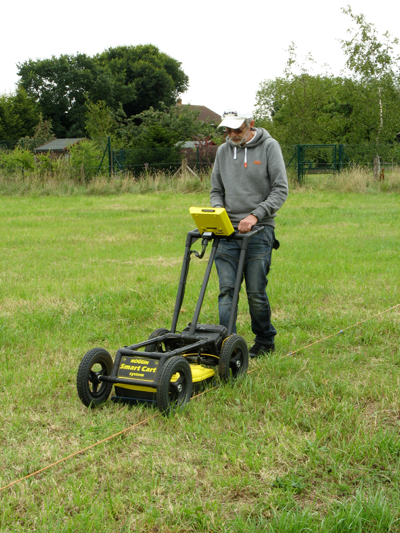 GPR equipment in use 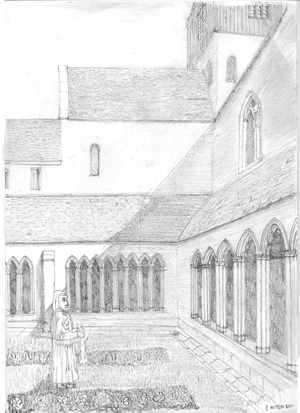 There is however one part of the Priory church for which records remain. Long after the rest of the church had disappeared and until just after 1800 the Nave (or part of it), together with the Tower and the North Transept remained and were in use as a farmhouse of which a plan and several sketches still exist. The plan gives the Nave a length of about l0 metres from the arch. This length is so short that it was always thought to be only part of the original Nave, with the rest having been lost, When looking at the 3 sketches however it was realised that although all slightly different, they all showed the farmhouse being much longer than l0 metres and that by implication the plan was wrong. By analysing the 3 sketches, Bernard Mutton, a consultant of monastic & ecclesiastical architecture, calculated the true length as being about 15.5 metres. This distance fits neatly into one very likely category of length, the others, less likely being about 23 or 26 metres. These expectations are based not upon actual distances but upon ratios of length to width at other Augustinian priories. 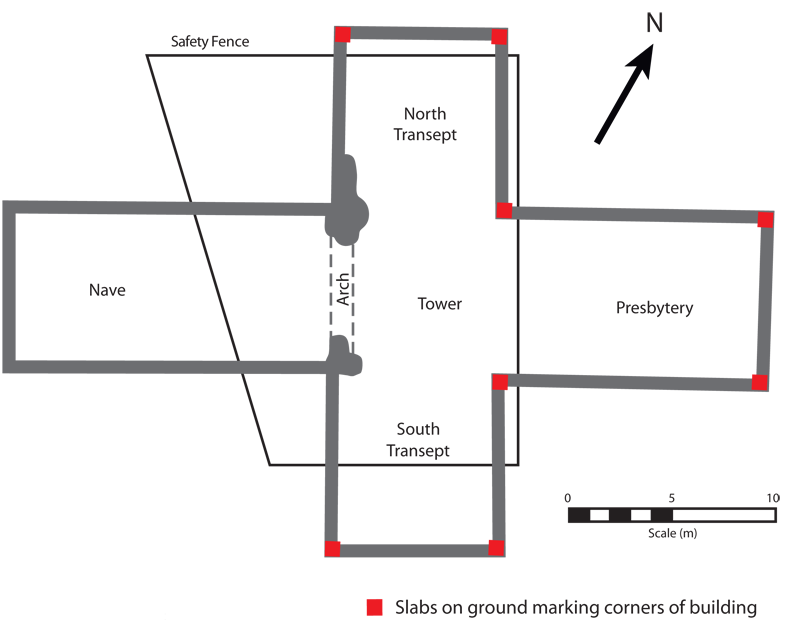 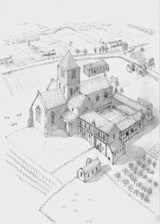 What the Priory may have looked
like, viewed from North East

Having exhausted all other methods, the group decided to try to find out by digging. Excavation is not permitted within English Heritage land but their jurisdiction finishes at about 16 metres West of the arch along the line of the South Nave wall. They started their dig just beyond there and found no trace of the Nave but there had been so much 20th Century disturbance that they could not be sure. Not until 20 metres did they find original undisturbed ground and there they definitely found that the Nave had not reached so far. It was concluded that it was most likely that the Nave had never been longer than around 15.5 metres from the arch.

The square stones that can be seen on the ground around the arch mark the corners of the North and South Transepts and the Presbytery with the closely mown grass marking the lines of the walls.