There had been a hermitage on this site until around the end of 1154, when it was converted into a priory for Black Canons an order of Augustinian Canons, who followed the Rule for Monks written by St. Augustine. It was in fact known as Wodeham Priory until 1235 when the name Bicknacre first occurs.

The arch you can see today is all that remains of the priory built in about 1250. It formed part of the nave and the western side of the tower of the church. Building materials were mainly local iron puddingstone with some brick and old roman tiles. Dressing stones were of Reigate stone and a harder limestone imported into the area. The wealth of the priory gradually increased as it acquired donations of land and rent from properties in exchange for prayers.

Originally build to accommodate about fifteen monks, it was small compared to other orders but from about 1450 the numbers fell considerably. In 1507, on the death of the last prior, the monastery was dissolved and accordingly reverted to the King. Apart from the priory itself, its possessions included the Manor of Bicknacre, the church, 30 houses, 300 acres of farmland, 40 acres of meadow, 44 acres of wood and 500 acres of pasture in many surrounding villages.

The priory stood empty until 1509 when it was united by Royal Licence, together with all its possessions, with the Hospital of St. Mary, without Bishopsgate. A condition of the licence was that a chaplain resides at Bicknacre to offer prayers for the souls of past kings and other benefactors. The priory remained in the hands of the hospital until the dissolution of the monasteries around 1536. Once the lead was removed from the roof, decay set in and the buildings were soon reduced to ruins. Much of the stone, it is said, was used to repair local roads. 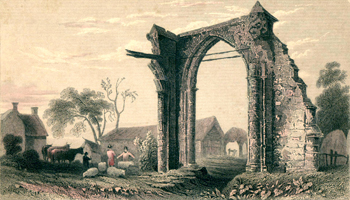 In 1548 the Manor of Bycknacre, with the remains of the priory was sold and subsequently passed down through several generations and divided up. In 1786 Bicknacre Priory Farm was sold. A visitor to the priory in about 1800 noted that the arches forming the tower had been roofed, and with a considerable part of the nave formed the farmhouse.

The remains were completely abandoned in 1812 and gradually demolished until the owner ordered that the last of the four tower arches be preserved. He apparently fitted the steel band to the top of the arch and tiles to protect it from further decay. It is said that the bones of some of the monks disturbed during excavations were deposited under the roof.

In the early 1930s a holiday home, consisting of several wooden huts, was built in the field near the arch for children attending Sunday school at a church in Bethnal Green. Later a small chapel was added next to the arch. The holiday home was closed at the start of the Second World War when the children were evacuated; the huts however were used during the war by local servicemen and afterwards as storage by Bonds the Chelmsford department store. They were later demolished but the chapel remained standing until the farm was sold.