History of the Land

The Priory gradually acquired more and more land, mainly from donations, until at one time it owned nearly 1000 acres, including woodland, meadow, marsh and pasture, scattered around local villages.

In 1786 Bicknacre Priory Farm was sold and was described as about three hundred and fifty acres off arable, meadow and pasture-land and about fifty six acres of woodland. The sale included The Priory House, excellent barns and outhouses of every description.

The farming methods used since the 15th century have preserved the pattern of small fields that are now unusual in Essex. 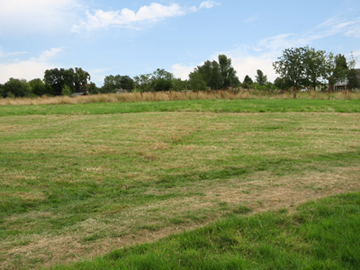 In the Monument field you can just detect undulations running across the field running from north to south. The peaks are about 6-7 metres apart, or more probably a chain i.e. 22 feet and were caused by a method of farming in the middle ages known as ridge and furrow.

Fields were divided into strips and a family would own one or more of these strips. Traditional ploughs only turned the soil in one direction so ploughing would start along the centre line of the strip and the plough would turn the soil over to the right. At the end of the strip the plough was removed from the ground and taken to the other side of the furrow to work back up the strip causing the soil to build up towards the centre of the strip. Over the years the ridges grew higher and it is thought this was deliberate so as to improve the drainage. The furrows also marked the boundary between plots.