The Priory Arch you see today is all that remains of the 12th century Bicknacre Priory. It comprises the west arch of the crossing of the church with attached fragments of the nave and north transept. 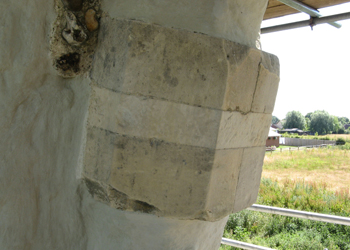 The walls are primarily built of flint, ironstone, conglomerate and tufa with brick and tile. The arch itself is of light grey Reigate stone and a cream coloured limestone, probably from Caen. Originally the whole surface would have been covered with lime plaster so the varieties of stone would not have been seen.

Analysis of the construction of the remains suggests that the crossing arches were inserted into the 12th century priory church during the 13th century and that the building was changed and expanded several times during its life as a priory.

The priory closed in 1507 and was converted to residential use as indicated by numerous repairs in various types of Tudor brick. Subsequently a wooden joist was inserted to form a floor within the roof. During the 17th and 18th centuries the decaying building was converted several times, being used mainly as a farmhouse. The ruin was consolidated in the early 19th century, before 1832, when the wall over the remaining arch was rebuilt and the pegtile roof added together with the iron tie-rods and the reused semi-circular stones on the end of the north wall.

Further restoration work was carried out in 1997 and again in 2008 when much work was done to prevent the ingress of water between the stones.